A Little Bit of Christmas Magic

Where did the idea of this book start? What led to it being written?

It’s linked into the first Rossetti Mysteries book, ‘Some Veil did Fall.’ I loved the historical characters in Veil, and  desperately wanted them to have more of a story. I couldn’t really do a follow-up for them, but a prequel sounded ideal. I also love the idea of a traditional Victorian Christmas, and of course a good Christmas ghost story like Dickens ‘A Christmas Carol’. So that’s how it ended up as number 4 in the series, a timeslip, and has Christmas Present. Christmas Past and Christmas Yet to Come in it!

How did you create your heroine? What drives her?

Ailsa is a minor character in a contemporary novella I’ve written, and she seemed perfect to use for this book. She is a wedding planner, and is all for happy endings and love stories. I just needed to give her a reason to be at work on Christmas Day and to have her own reasons to wish herself back into the Victorian era – which works out very well for her in the end.

Are any of your characters based on someone you know?

No, at least not knowingly! Maybe one or two character traits sneak in unawares, but nothing that singles anybody out – I think I’d lose a lot of friends if I started putting them in books. One of my friends has been used as ‘character’ on a couple of occasions, and certain very thinly disguised elements of her life fall into at least two books –  and trust me, she is no longer friends with the author!

Who is your favourite character and why?

What’s next… what are you writing now?

I’m working on edits for the third book in my new Hartsford Mysteries series. It’s trebled in size since I initially sent it off, and has changed from a contemporary novella to a full-blown dual timeline novel with a hint of ghosts. Then I have four more novellas sitting with the panel at the publishers, so hopefully I’ll get to work on one of those at some point if they are accepted. And I’m playing around with the third book in another series, the first one of which came out at Halloween. I’m only a couple of thousand words into it, but I’m sure it will sort itself out eventually. 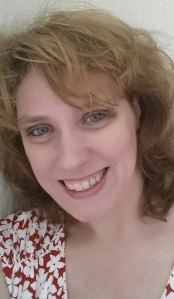 Kirsty is from the North East of England and won the English Heritage/Belsay Hall National Creative Writing competition in 2009 with the ghostly tale ‘Enchantment’.

Her timeslip novel, ‘Some Veil Did Fall’, a paranormal romance set in Whitby, was published by Choc Lit in Autumn 2014. This was followed by another Choc Lit timeslip, ‘The Girl in the Painting’ in February 2016 and ‘The Girl in the Photograph’ in March 2017. October 2017 saw the release of ‘Watch for me by Moonlight’,  ‘A Little Bit of Christmas Magic’ and ‘Every Witch Way’, again, all published by Choc Lit. The experience of signing ‘Some Veil Did Fall’ in a quirky bookshop in the midst of Goth Weekend in Whitby, dressed as a recently undead person was one of the highlights of her writing career so far!

Kirsty’s day-job involves sharing a Georgian building with an eclectic collection of ghosts – which can sometimes prove rather interesting.